Truly romantic: Heidelberg Castle is world-famous, attracting over a million visitors every year from all over the world. Since the early 19th century, the impressive ruin has become a synonym for romanticism.

The epitome of German Romanticism worldwide

Truly romantic: Heidelberg Castle is world-famous, attracting over a million visitors every year from all over the world. Since the early 19th century, the impressive ruin has become a synonym for romanticism.

A crowd-puller with a great history

Heidelberg Castle is the most visited tourist destination in Baden-Württemberg: every year, over one million visitors come to be fascinated by the special atmosphere of the powerful ruins. And they marvel that here in the romantic Neckar Valley, there once existed one of the centers of power in Europe – for Heidelberg Castle was the residence of the influential Palatine Electors. Since the Middle Ages, they cemented their claim in the Roman Empire through the wealth of their palaces. The Electors’ Castle was one of the most magnificent in Europe – and its holding of court absolutely glittering. The Ottheinrich Building, the Friedrich Building, the English Building – the palaces built on the grounds were justly famous. When a new palace garden was laid out on the terraces at the beginning of the 17th century, this “Hortus Palatinus” (Garden of the Palatinate) – had already gained a legendary status in its project stage.

World fame as a ruin

In the turbulent 17th century, the castle fell victim to the wars between France and the Electoral Palatinate. Since the castle in its surroundings in the narrow Neckar river valley was no longer to their taste, the Electors relocated their residence to Mannheim in the Rhine valley, where they built a gigantic baroque palace. And Heidelberg remained a ruin! This represented the beginning of a new career for the venerable walls, as the romantic poets and painters discovered the beauty of the ruins. Heidelberg Castle became the top destination of the newly emerging tourism and established itself as the obligatory target of all travelers in Europe.

Those who visit the castle today can turn the journey there into a historical experience: leaving behind you the snarl and confusion of buildings in the old town, take a comfortable trip with the over 100-year-old funicular up the steep castle hill. Once in the castle, you absolutely have to visit the Great Barrel: this historical wooden barrel could hold 220,000 liters of wine. The German Pharmacy Museum with its historical furnishings is also well worth seeing. And, of course, you should allow plenty of time for all the views that Heidelberg Castle has to offer. The most famous of them is the view from the castle balcony across the roofs of the old university town into the Neckar valley and onto the Rhine valley. 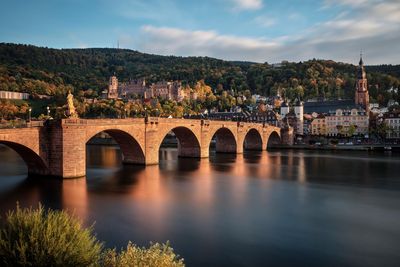 We use cookies to provide you an optimal website experience. First and foremost, these are cookies that are necessary for operating the website. In addition, we use cookies for the purpose of analysis and anonymized statistics. You can find further information in our data privacy statement. data protection notice. Consent to the storage of cookies and access thereto is based on § 25(1) of the TTDSG (Telecommunications and Telemedia Data Protection Act) and consent to further data processing is based on Article 6(1)(a) of the GDPR.

These cookies are necessary for operating the website and cannot be deactivated. In general, these cookies are only created in response to actions taken by you, e.g., when filling out forms. This is how your browser’s various queries are assigned during a single session. It is how your computer can be recognized when you return to the website. You can set your browser to block these cookies. However, this will result in reduced functionality of our website.

fe_typo_user
This session cookie stores a session ID, which enables the assignment of your browser’s various queries during a single session. It allows for the recognition of your computer when you return to the website. The session cookie is deleted when you close your browser.

This website uses Matomo (www.matomo.org) technology to collect and anonymously store data for marketing and optimization purposes. These cookies enable us to count page views and clicks so that we can measure and improve the performance of our website.

_pk_id
Storage period: 13 months.
This cookie stores information on the user, e.g., a unique user ID, visits to the website, and also the date and time (time stamp) of the creation of the cookie.

YSC
Storage period: The duration of the visit.
This cookie creates a unique ID to retain statistics on the YouTube videos viewed by the user.

PREF
Storage period: 8 months.
YouTube uses this cookie to store information such as the user’s page configuration preferences and playback settings such as autoplay, randomized mix, and player size.